The World of Fairies

Another Original Fairytale by Vikki Anderson

The World of Fairies is a mysterious world, one in which the fairies keep to their dimension and distance themselves from mortals, yet let us see their strengths and accomplishments in so many ways.

For instance, have you ever noticed that sometimes you can’t find your car keys or have misplaced papers and after you have given up all hope of ever finding them or thinking yourself one of the newest casualties to Alzheimer’s disease, all of a sudden they are right in front of your nose?  Did you ever feel moody or depressed and then walk out into a wooded area or flower garden and feel a little better?  Sometimes it’s not just the way we feel, it could be the way other beings or spirits influence us to feel.  Nature has many cycles, has many forms and encompasses many creations.

The “creation” we will discuss in this story is: F A I R I E S

Fairies are a very general term describing any spiritual being that resides in or helps a particular part of nature.  Some of them even become an object for its entire life.  For instance, it is said that some Oak Tree Fairies would actually merge with the oak tree and live a considerable number of years growing older and wiser and seeing the Earth and its inhabitants evolve.  Apparently, the fairies are not pleased with the evolution of mankind or our environment and have been retreating into objects or stay hidden from humans so that we may never know the pleasure of having them around us to help.

It is said that fairies were very common when civilization was young and eventually as countries were settled.  With the continued settling of the country, the wee-ones felt they were being pushed out of their homes and natural environments.  In defense, many of them turned themselves into wild animals to protect themselves against these stranger or intruders.  It is not that fairies are nasty, although some have been known to be, it is just that they have a limited resource, Earth, and they see us slowly but surely destroying it.  They can guide us and offer to help with our new obsession of recycling and saving Mother Earth, yet it seems too much damage has already been done.  There are Earth Fairies who protect our environment and the planet.  They are trying to make all of us aware of our natural resources and the limited time that is left before we have exhausted all of our renewable resources.  They are trying so hard to help us only if we would listen to our intuitions and let them. 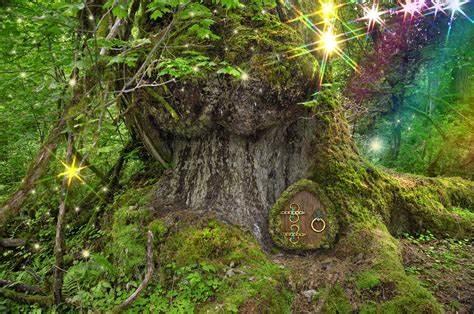 Fairies or Sprites (male fairies) hide in meadows and fields and particularly love flowers and tall grasses.  They love to spy on humans to see what we are up to, and are particularly playful, like human children.  They may even try to get your attention in unusual places and in strange ways.  Sometimes, it might feel like a bug is crawling on you and you try to brush it off but there was nothing there!  Or if you are walking through a field or meadow and you are suddenly aware of wiping cob webs from your face.  Usually cobwebs aren’t found at that level and have nothing to cling onto in an open field; so again, it is “the little ones” trying to make you realize they are awaiting you to invite them into their lives.

Copyright (c) 2020 by http://www.vikkianderson.net and Vikki Anderson.  Do not reprint this article without the author’s name.